The International Volunteers’ Meeting gathered around 40 participants from Greece, Italy, Spain and Bulgaria in Città di Castello, Italy on 3rd and 4th of June 2016, at the headquarters of the Centro Studi Villa Montesca, which is one of the EVANDE project partners. The aim of the meeting was to offer an opportunity for the exchange of experiences among the civil protection volunteers coming from the EVANDE partner countries.

The first day, on 3rd of June 2016, each national group of volunteers presented its work, focusing on issues such as organizational structure, main activities, training methods, communication, partnerships, etc. The coordinators of each partner country offered also a short introduction on the national civil protection system in place aiming to clarify the framework where these volunteering groups are active in. Mr. Francesco Nocchi, presented also the system of civil protection under operation in the Municipality of Città di Castello. Following the morning sessions, a guided visit to the Operational Centre of Civil Protection of the Città di Castello Municipality was organized.

The second day, on 4th of June 2016, the group of volunteers and the EVANDE project staff were offered a guided tour to the Assisi Basilica by the restorer Mr.Sergio Fusetti. Mr. Fusetti talked about the human losses occurred and the material damages that have happened on the Assisi Basilica during the several earthquakes. In addition, he explained how the high-scale restoration efforts were coordinated in order to maintain the historical heritage, unique in the world, which is present in the Basilica of Assisi. In continuance, the group of participants visited the “Expoemergenze” National Exhibition on Security and Emergency in Bastia Umbra. During the exhibition, an evening session was offered to the visitors, where the civil protection volunteers presented indicative examples of their emergency intervention at local levels. Furthermore, Mr. Alfiero Moretti and Mr. Francesco Lucaroni, officers of the civil protection sector of the Umbria Region presented the legal, structural and operational framework of civil protection at regional level.

On their return, the civil protection volunteers that attended the meeting will participate in the training activities of the EVANDE project, particularly on the use of the e-learning platform. Local dissemination events will follow in each country as well, in order to disseminate the information and knowledge acquired during the meeting to other local civil protection volunteers.

You can download the minutes of the meeting from here. 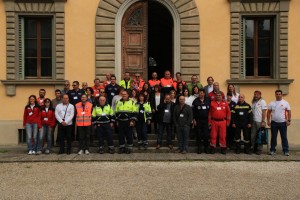